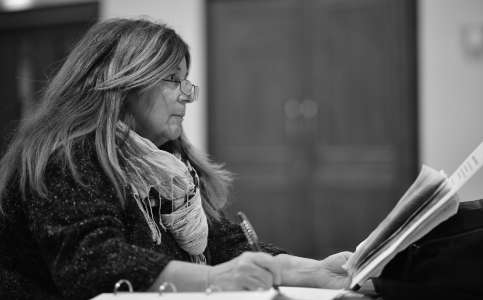 Cheryl lives on the Isle of Wight. She loves theatre and writes reviews and articles for Sardines Magazine for Amateur Theatre and other publications. Discovering a passion for drama many years ago, Cheryl has also run script writing and drama workshops for children, storytelling sessions and pantomime workshops. She has facilitated drama groups and produced shows.

On the write lines

A prolific writer, Cheryl has over one hundred scripts published with Lazy Bee Scripts and has scripts awaiting publication with Stage Scripts LTD. She has written and directed pantomimes, one act plays, murder mysteries and comedy sketches for drama societies. She also collaborated on the Titchfield Tapestry Plays and Romsey Ghost Walk (Barrett and Heather) and continues to write scripts and poetry. Her first published work was the pantomime DICK WHITTINGTON which she wrote and directed for a drama group. Her other solo pantomimes are ROBINSON CRUSOE: PIRATES and the CARIBBEAN QUEEN, JUNGLE BOOK the PANTOMIME, CINDERESSEX, GAME OF PANTO THRONES, BABES IN THE WOOD, JACK'S AMAZING BEANSTALK ROCKET, CINDERELLA and more recently, IT'S PANTO, BORIS - BUT NOT AS WE KNOW IT and THE GREAT BRITISH PANTO CHASE OFF QUIZ. As well as a body of solo scripts, Cheryl has co-written 11 pantomimes with Bob Heather.

Over the years Cheryl has been one of the pantomime specialists compiling the pantomime supplement for Sardines Magazine - Issue 21 Feb 2014, Issue 25 Feb 2015, Issue 29 Feb 2016, Issue 33 Feb 2017 and Issue 37 Feb 2018. Cheryl has co-written an all-encompassing books about pantomime, 'The Pantomime Writers Book of Gags and Routines', with foreword by Christopher Biggins, and 'More Gags and Routines for Pantomime Writers'.

Cheryl has always enjoyed writing poetry, and has performed her own poetry and comedy monologues in arts venues on the Isle of Wight.

Cheryl enjoys singing and has sung at jazz and blues events. She has been involved in amateur theatre for many years and has played a wide variety of roles including Mrs Sowerberry in 'Oliver', M’Lynn in ‘Steel Magnolias’, and twice played Madame Arcati in ‘Blithe Spirit’. Her favourite pantomime role was Dracula’s evil grandmother, Granula - after telling her chiropractor she wanted to play the part as an evil Yiddish grandmother but there was no such thing he replied, "You haven't met my mother-in-law..." Cheryl is the press officer for the Tennyson Townswomen Guild and is an active member of amateur dramatic groups on the Isle of Wight: Cowes Amateur Operatic Dramatic Society (CAODS), The Apollo Players, Curtain Up ADS and The New Strolling Players. She is also a member of the Bay Wailers Choir.

From page to stage...

As well as performing at regular spoken word events at The Freshwater Coffee House in 2020, Cheryl also performed a selection of her poetry on the spoken word stage at Rhythmtree Festival on the Isle of Wight. Cheryl directed her murder mystery, Blue Murder at the Blue Parrot, for Curtain Up drama group in March 2020 and November 2021. In March 2020 Cheryl facilitated a short playwriting course at Freshwater Library. In November Cheryl facilitated an online writing pantomime workshop for Cornwall Dramatic Association's Theatre Day. She hopes to spend more time in her garden writing den – ‘The Write Place’ to complete her collection of short stories, write more pantomimes, plays and comedy sketches and add to her series of history plays 'A Slice of...' for schools and youth theatre. Watch this space...

Cheryl has plenty of projects on the go - see EVENTS page for more details.